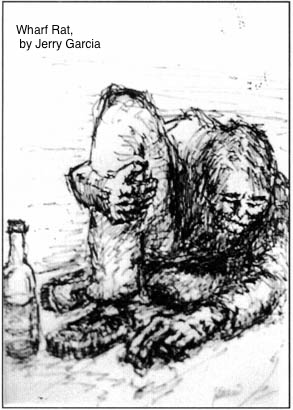 Like most of Robert Hunter’s works, the lyrics to “Wharf Rat” live beyond the intention of its author. It is as if Hunter gives his words to the world and lets them become what they will. I think this is the mark of a true poet. The meaning as originally intended is but one iteration of possible meanings. I would like to share what this song has come to mean for me, knowing well that alternative interpretations exist.

Songs are more than merely lyrics, and so I suggest that you perhaps listen to a performance. If you do you can feel some on the tragic pathos embedded within the music. The music and the lyrics combine to create something more than either by themselves. Here are two nice renditions. This first is from 1971 (raw and bare bones) and the second from 1977 (slower with different feel and more improvising).

As I understand it, this song’s narrative resides on three levels. The first level is introduced in the opening lines.

Old man down
Way down, down, down by the docks of the city
Blind and dirty
Asked me for a dime, a dime for a cup of coffee
I got no dime but I got some time to hear his story

This introduces us to the song’s two characters – the old man and “I,” the narrator. The first of the three levels concerns the old man, and so I will focus on him for now. We learn that he is in tragic shape. The song continues,

The old man’s name is August West, and we learn he is an alcoholic. We also learn about the love of his life, a woman named Pearly Baker. August loves Pearly even more than he loves his wine, and certainly more than his maker – God. August understands God to be against him, perhaps blaming God for his current state.

Everyone said
I’d come to no good, I knew I would Pearly, believe them
Half of my life
I spent doin’ time for some other fucker’s crime
The other half found me stumbling ’round drunk on Burgundy wine

August next tells the narrator that “everyone” predicted that his life would turn out badly. August seems to have come to this realization himself in former times. I have never been quite sure how to understand “I knew I would Pearly, believe them.” Is he suggesting that Pearl also knew he was headed for desperate times, or is he pleading with her mid-thought in some way?

August to this point has been sad, reflective, and relatively honest. His mood changes briefly to anger as he speaks about his time in jail. He blames this on “some other fucker.” Is he really a victim, or is he diverting the blame from himself? August divides his life into two halves. One half he is in jail, and the other half he is drunk. Did his jail time damage him, leading him to his present condition?

(At Grateful Dead shows, the crowd used to cheer as Jerry sang the word “fucker.” Is it the delight of hearing Jerry swear? If so, it is disconnected with the narrative of the song. Is it because the crowd also feels victimized? At some point I think this moment of cheering became a ritual of sorts, and ended up not really signifying anything other than the ritual pleasure of group repetition.)

Now August pleads for hope. He says he will “get back on my feet again someday, the good Lord willin'” The someday defers this change – perhaps indefinitely? This change according to August, will only happen if God wills it to happen. August has a conflicted relationship with God. On the one hand he counts him his enemy and on the other his only hope of redemption. August blames God for his state of being, and also believes that only God can save him. His idea of God has robbed him of agency leaving him powerless to change.

He claims that he will “get back on his feet,” and “fly away.” Now according to the narrative as it has unfolded in my mind at least, this is vain pleading, and we know that poor August will never change his life. He will never get up and fly away. He holds on to this vain hope desperately as if his life depends upon it, but it is a lie.

I realize that these verses could be interpreted otherwise, but this interpretation seems to me to the close to the overall mood of the song. Again, here I am indulging you with my interpretation as it has unfolded to me over the period of almost forty years, so please take it as such.

Pearly’s been true
True to me, true to my dyin’ day he said

August’s desperation thickens as he expresses his belief that Pearly has been true to him. The way I hear this is Pearly is no longer with August, and probably hasn’t been with him for a very long time. Yet she is the only one that connects him to human society. (Admittedly filling in some gaps in the lyrics) I have assumed that Pearly has likely not been faithful to August and may not even remember who he is.

This ends the story of August, the first level of the narrative.

The narrator breaks into the story, realizing how important Pearl’s fidelity is to August, he reassures him: “Absolutely Pearly has been true to you – I am sure of it.” This is a lie, of course; how could our narrator be sure of this? However, this lie is a humanly necessary one. It is the one thread of hope that August has to hold onto. If it is gone, his life is utterly meaningless. So of course the narrator, having a good heart, is happy to encourage August to believe his lie. We will find out that there are also other personal reasons for our narrator’s reassurance.

I got up and wandered
Wandered downtown, nowhere to go but just hang around

The narrator takes his leave of August and wanders. He goes downtown but does not have a specific destination in view. Rather he goes to merely “hang around.” It might be recalled that at the beginning of the song, the narrator responds to August’s request for a dime by saying, “I got no dime but I got some time to hear his story.” Here we learn two things about the narrator – his has no money, but has an abundance of time. If we put this together with the fact that he has “nowhere to go,” a picture of our narrator begins to emerge. He himself may be homeless and without a job.

The narrator, like August, also has a “girl” – Bonnie Lee. And like August the fidelity of this woman becomes important. The Narrator has not heard August’s story as one who is uninvolved. August’s story becomes his own. The same desperation driving August to his need to believe in Pearly’s fidelity drives also the narrator to believe Bonnie Lee’s. Bonnie Lee provides the same lifeline to the narrator that Pearly provides to August. She is the one thing that keeps the shadows and the void of a meaningless life at bay.

Is the narrator’s hope concerning Bonnie Lee a false hope like August’s is?

The narrator sees August as a warning of what he himself might become. Of what he himself has already become? The narrator meant to give a little time to a bum on the docks, and goes away experiencing a significant existential crisis. This the narrative’s second level (as I understand it).

This song was written in 1971 during a time when the counter-cultural youth movement was still going strong. As the 70’s turned into the 80’, this movement continued in an more underground form associated with the Grateful Dead. Many “Deadheads” made radical changes in their lifestyles in relationship to the band. I myself dropped out of school, sold everything I had (or mostly everything…) and “went on tour” in the early 80’s. (In the 90’s this “underground” movement surfaced and became strangely mainstream.)

I am not the first one who has interpreted this song this way. I remember at a New Years Show in 1980 in Oakland the band started play Wharf Rat, and behind me I hear this guy shout “I am the Wharf Rat!” At the end of the show as everyone is leaving I notice this guy passed out on the floor. Yes, my poor friend, maybe you are the wharf rat? (Maybe I am? Maybe we all are?)

The participatory experience this song invites it audience into is deeply self-reflective. It is not a feel-good experience, but one that threatens to uproot all the lies that keep the night at bay. At stake is life itself – does being alive mean anything at all? The song asks its audience, “who is your Pearly Baker?” “What illusion is keeping your darkness at bay?” It asks if the counterculture surrounding the band is as empty as the dominant culture? It provides no answer: that must be provided by the one listening to the song (if it is to be provided at all).

This is one of the reasons I love the Grateful Dead – while they have their share of frivolous songs, some are so honest they threaten to tear us into pieces.