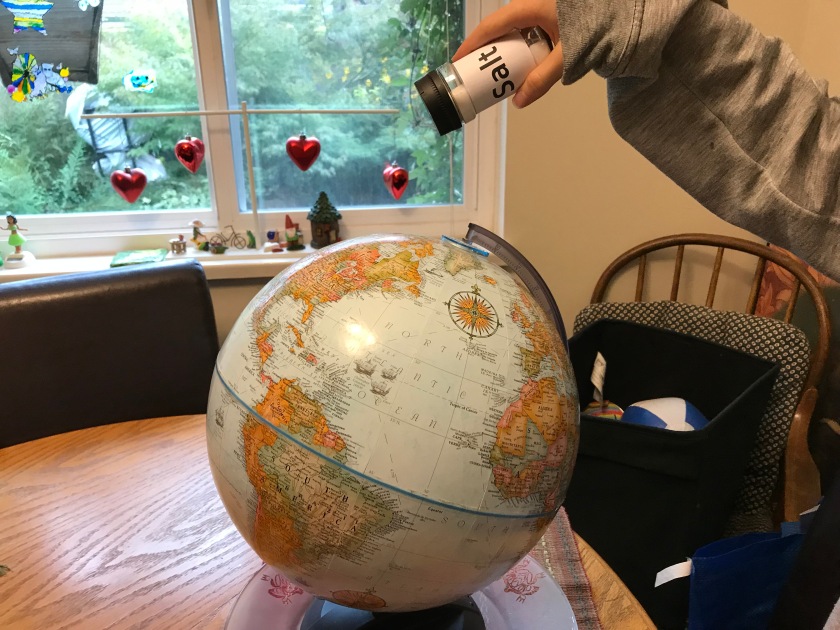 You are the salt of the earth; but if salt has lost its taste, how can its saltiness be restored?
It is no longer good for anything, but is thrown out and trampled under foot.
Matt. 5:13

“You are the salt of the earth.”

There are some who hold that the meaning of Jesus’ parables is obvious. I am not so sure. They are playful and troubling, and sometimes subversive, but rarely obvious. So, what does it mean to say that “You are the salt of the world?”

First, who is the “who” here? That depends upon the target of Matthew’s Sermon on the Mount, within which this saying is found. The introduction to the sermon says, “When Jesus saw the crowds, he went up the mountain; and after he sat down, his disciples came to him. Then he began to speak, and taught them, saying…” (Matthew 5:1-2). Is Jesus speaking the crowds (outsiders) or the disciples (insiders) – or both? Just before the salt saying, Jesus switches from the third person (“Blessed are those who are persecuted for righteousness’ sake, for theirs is the kingdom of heaven” [Matthew 5:10]) to the second person (“Blessed are you when people revile you and persecute you and utter all kinds of evil against you falsely on my account [Matthew 5:11]). The proximity of the “you” in 5:11-12 with the “you” of 5:13 suggests that Matthew’s Jesus is referring to the same group of people. The “you” of 5:10-11 are those how are “persecuted” for the sake of Jesus. Hence, they are followers of Jesus. This means that the “you” of the salt saying is also the followers of Jesus.

Okay, this is probably the easiest part of the parable. Now, what does it mean to be the salt of the earth? If we heard someone say this today, with what we know about salt consumption and health, we might be forgiven if we conclude that the followers of Jesus are those who give the planet high blood pressure and threaten it with a terminal heart attack. The morale of the parable would be to serve as a warning to outsiders to keep away, or risk possible death. A casual scan of church history lends some credence to this warning. Obviously, this is not the meaning that Matthew or Jesus intended.

Jülicher, writing in 1910, believed “the metaphor ‘salt’ could be replaced by any other,” such as, “you are the coal of the earth.”[1] To be the salt of the earth cannot mean the same thing as being the coal of the earth! If Jülicher is to be followed, why not the sugar of the earth?[2] So, contrary to what Jülicher thinks, the meaning of the saying is changed if “salt” is exchanged for another substance. This means there is something about salt that is important. What is it? What does it mean to be salt-like?

We regularly transfer ideas from a taste domain to other domains through metaphor. When we say that someone is sweet, we all know this is a figural statement. If we were to lick a “sweet” person, we’d probably find out that this person was more salty than sweet. But we all know that a sweet person is one who has a pleasant disposition. Likewise, a sour person is someone who is unhappy and a bitter person is someone who is resentful. But what is a salty person?

Evolution equipped humans with the ability to discern important information from primary tastes (sweet, salt, sour, and bitter). They can tell us which foods might be helpful and which might be harmful. Bitter can indicate that something might be poisonous. “Sweet foods usually had calories. Salty foods had important vitamins and minerals. Sour foods could be healthy, like oranges, or spoiled, like rotten milk.”[3] So perhaps “salt” in Matthew 5:13 has something to do with health and benefit?

Salt was an important commodity in the ancient world. It was so important that Ben Sirach states that along with water, fire, iron, flour, milk, honey, wine, oil, and clothing, salt was a basic necessity for life (Sirach 39:26). Salt was regularly used as a seasoning (Job 6:6), as it is today. It might have even been used as a flavour enhancer for offerings presented to God (Leviticus 2:13, Ezekiel 43:24, Josephus Antiquities 3.9.1). Matthew 5:13 speaks of salt losing its “taste” (μωραίνω), which means that this saying is concerned with salt’s use as seasoning.[4]

The English translation “if salt has lost its taste…?” (NRSV) conceals a word play. In the Greek the word for “lost its taste” is μωραίνω (Moraino), which also means to be foolish. Hence, to lose one’s saltiness has to do with being foolish.

What does it mean for salt to lose its taste? Salt in fact cannot lose its saltiness. Hans Dieter Betz has written, “salt losing its saltiness is like water losing its wetness, a real absurdity…”[5] Hence, this saying presents us with an impossibility, salt losing its saltiness is a chemical impossibility. Is this important? That is, is it to be an important part of our interpretation that Matthew’s Jesus asks us to imagine something that could never happen? Does this question presume a modern understanding of chemistry?

The Babylonian Talmud tells a story of a battle of wits between R. Yehoshua b. Hananya and some wise Greeks. The Greeks ask, “When salt becomes unsavory, wherewith is it salted?” The Rabbi responds, “With the afterbirth of a mule – And is there an afterbirth of a mule? – And can salt become unsavory?”[6] The Rabbi answers the impossible question of the Greeks with an impossible answer.

Is Matthew’s Jesus really asking his followers to conclude that salt can never lose its saltiness, and therefore it will never be thrown away? The reader must decide. Taken as a warning, it would seem that this saying asks us to imagine a situation where salt can do the impossible. If we do not imagine the impossible, this saying ceases being a warning, and becomes san oddly phrased promise!

I will proceed with the assumption that that it is a warning, but I also want to point out that this is a decision. I suggest that Jesus’ parables often present the reader with an interpretive decision that must be made before one can continue. Parables require that the reader participate in the meaning-making process. They are audience-participation sayings. We cannot remain neutral observers: we must stake out a decision, and see where it leads us.

The followers of Jesus are to salt of the earth. The follower of Jesus is not for themselves, but rather for the world. This is perhaps the most striking part of the parable. The church regularly adopts for itself what could be called an imperialist posture towards the “earth.” That is, it sees its goal as being the assimilation of outsiders. It seeks to “convert” those who are not Christians and bring them into the fold. The Great Commission of Matthew 28:19 suggests this sort of approach to outsiders. This parable does not move in this direction.

Followers of Christ are to be “seasoning” for the “earth.” “Earth” (Greek, γῆ) can mean the place where humanity lives, or it can mean the humans who reside on this place.[7]

Put in modern cosmological terms, it can mean our planet, or it can mean us. The Followers of Jesus are to provide seasoning for the rest of humanity, or for the planet itself. Now imagine being served a bowl full of nothing but salt. It would be useless. It would provide no nutrition – indeed, it couldn’t be consumed in the first place. Now, take a pinch of that salt and add it to some other food and that food becomes more delicious. The point of the salt it to make something else better. It is not for its own sake. It is that which is good in the service of others, but terrible by itself. Jesus’ followers, then, are to make the lives of others better – more flavourful if you will. Their job is to make that which around them “taste better.” It is not their mission to try and make everybody else salt! Imperialist Christianity, past and present, would see their mission to make everybody else salt. This is not what Matthew’s Jesus wants. The “earth” is to remain as earth, but now should “taste better.” In short, according to this saying, the followers of Jesus are to improve the lives and experience of others – it is not to win others over. If someone want to become a follower of Jesus, all is well – but that is not the focus at all, as far as this saying is concerning.

This parable contains a warning couched in another play on words. The word “earth” in both Greek (γῆ) and English also means “soil” or “dirt.” This presents the follower of Jesus with two options – they can live in service of the earth and try to bring more flavor into the experience of others. Or they can be thrown on the earth and trampled on. It seems that the follower of Christ will end up mingled with earth on way or another – either as seasoning or as that which is useless.

(But is salt ever really useless? Can we imagine the impossible? Can salt cease being salty?

What do you think?